The Terrace at the Gritti Palace 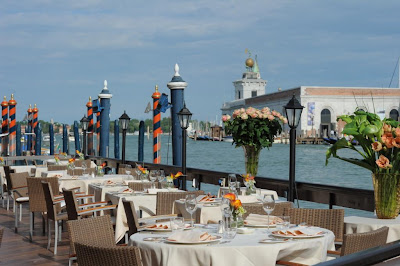 (Venice, Italy) The terrace of the Hotel Gritti Palace is a magnetic location, attracting the illustrious and industrious from all over the world. The Terrazza Gritti has supported the weight of kings and queens, ambassadors and diplomats, movie stars and fashion models, politicians, writers, conductors, composers, architects, artists, designers, intellectuals -- even a Head of State or two. With its spectacular view of the Grand Canal, it is the dramatic setting for prestigious corporate lunches as well as intimate private dinners. Just a five-minute walk to La Fenice, or ten minutes to the Goldoni, the Gritti terrace is the place where opera and theater lovers congregate before and after the show. The Gritti terrace is connected by boat to the Hotel Excelsior on the Lido for resident guests of both hotels that allows easy access to the Venice International Film Festival. 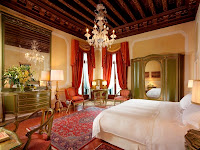 Ernest Hemingway often enjoyed a meal and a bottle of Valpolicella on the Gritti terrace, then wandered one floor up to his suite to put the finishing touches on his novel, Across the River and Into the Trees, which was inspired by his relationship with a young Venetian aristocrat, Adriana Ivancich. Years after Hemingway's death, Adriana wrote her own book about the relationship, White Tower, and in 1980 revealed to People magazine:

She last saw Hemingway in Venice in 1955. They sat on the Gritti terrace overlooking the Grand Canal. It was sunset in one of the world's most beautiful cities. Adriana remembers that tears rolled down the author's cheeks. "Look, daughter," he said. "Now you can tell everyone you saw Ernest Hemingway cry." 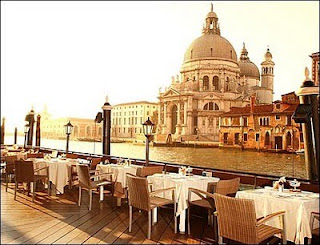 The celebrated English novelist, W. Somerset Maugham, author of "The Razor's Edge" and "Of Human Bondage" often stayed at the Gritti. In a letter dated June 18, 1960, he wrote:

“There are few things in life more pleasant than to sit on the terrace of the Gritti when the sun about to set bathes in lovely colour the Salute, which almost faces you. You see that noble building at its best and the sight adds to your satisfaction. For at the Gritti you are not merely a number as you are in those vast caravanserais that are now being built all over the world; you are a friend who has been welcomed as he stepped out of his motor boat, and when you seat down to dinner at the very same table that you sat at the year before, and the year before that, when you see that your bottle of Soave is in the ice-pail, waiting for you, as it has been year after year, you cannot but feel very much at home.”

Paolo Lorenzoni, the Gritti's charming and elegant general manager, a recent transplant from Rome, has invigorated the terrace with fresh ideas; making it even more inviting. A door that leads directly into the Bar Longhi has finally been opened after decades of being shut, allowing both local residents and guests at the hotel to bypass the reception desk and enter from the courtyard in Campo San Maria del Giglio. With its hand-sculpted mirrors, the intimate Bar Longhi, named after the Venetian artist, Pietro Longhi (1701 - 1785), is a cozy retreat if the weather outside discourages use of the terrace -- paintings from the school of Longhi deck the walls. 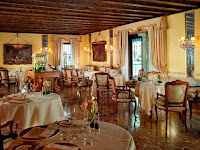 Overlooking the terrace is Club del Doge, the Gritti's spacious dining room. Executive chef Daniele Turco has ventured to Malta, Sicily and Istanbul, and combines the traditional with the exotic, Northern Italy with the South, and Venice with Byzantium. In addition to the classic menu based on fresh, local, seasonal products, a recent collaboration with the Peggy Guggenheim Collection inspired the talented chef to create whimsical dishes based on the temporary art exhibitions "Robert Rauschenerg: GLUTS" (2009) and "Utopia Matters. From Brotherhoods to Bauhaus" (2010) (see left sidebar).

Although there is no official evidence on the real date of construction of the palazzo, its origin can be established towards the end of the 14th century. The façade itself reveals that it was altered and restored many times. According to some sources, the façade was once decorated with frescos attributed to Giorgione. 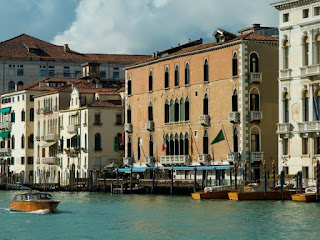 The palace was the residence of the noble Venetian family Pisani family before being acquired in 1814 by the nobleman, Camillo Gritti, a descendant of one of the most important families in Venetian history, with origins that date back to the year 1104.

In the second half of the 19th century, the ownership of the palazzo was in the hands of Baroness Susanna d-Eyb, widow of Baron Vetzlar. During this time John Ruskin and his young wife Ettie spent a long period at Palazzo Gritti, during which time Ruskin wrote his famous book, The Stones of Venice.
.
At the beginning of the 20th century, the palazzo was converted into a hotel and annexed to the Grand Hotel, the adjacent palazzo, which today houses the Veneto Regional Government. Following the Second World War, Compagnia Italiana Grandi Alberghi acquired the palace, restored it, and officially opened the Hotel Gritti Palace on June 5, 1948, attracting intellectuals, nobility and artists, a tradition that continues to this day. The Hotel Gritti Palace is now part of The Luxury Collection, one of the prestigious Starwood Hotels & Resorts' brands.

Posted by Cat Bauer in Venice Blog at 1:04 AM 5 comments:

"March 24-25 1954: Ernest Hemingway announced he will stay in Venice to recover from the injuries incurred in the well-known African accidents, with a powerful cure based on scampi and Vapolicella."
THE MENU
Scampi risotto with crustacean bisque
Ginger and honey flavored duck with aged Port sauce
Chocolate cigar with Bourbon sauce
Friandises
Accompanied by a glass of Allegrini wine
Soave D.O.C. and Valpolicella Classico
88 euro per person
Click HERE to book your lunch or dinner reservation.

Touches of vivid, separate colors which enhance the elements on the plate. An excursion into taste and colors, just as in a neo-impressionist painting.

A simple and essential approach to primary ingredients which mix and bind perfectly with each other while, at the same time, preserve their own identities. The return to past cooking techniques which please the palate, and place all in agreement.

Utopian aesthetics are experienced in close relationship with nature; the lush green landscape recreated in this dish evokes the expression of the Cornish Art Colony artistic movement though color, taste and olfactory combinations.

The combination of shape, color, and flavor, which is present in the aesthetic organization of the elements on the plate, recalls the masterpieces of Russian Constructivist Art.

The Gritti Palace Re-opened on February 1, 2013

The Hotel Gritti Palace, the favorite residence of Greta Garbo, Winston Churchill and Mark Twain -- just to mention a few names out of an endless list -- counts three stunning suites overlooking the Grand Canal. Suites that appear suspended in time, filled with a historical past and where nobility blends with the comforts of modernity.

Total well-being is offered in an indigenous setting complemented by floor-to-ceiling windows onto the Grand Canal, precious carpets and authentic Venetian antiques.

The most famous suite carries the name of the writer who held it in preference: The Hemingway Suite. Here Ernest Hemingway stayed at least four times between 1948 and 1954 and wrote many pages of his last novel “Across the River and into the Trees”.

More than 60 square meters lavishly decorated in ivory and green hues and rare fabrics, The Hemingway Suite consist of an entrance, a small guest bathroom, a spacious living room equipped with Bang & Olufsen TV/DVD and CD players, an
elegant bedroom embellished with a unique Murano chandelier, and a luxurious marble bathroom with double sinks.

An exclusive Pillow Menu allows Guests of the suites to choose their preferred pillow filling and size from a selection that exceeds the expectations of even the most demanding
clientele. The suite offers breathtaking view from a balcony onto the Grand Canal, on one side the Santa Maria della Salute Church, masterpiece of the XVII cent. architect Balbassare Longhena and on the other the unfinished fascinating Palazzo where the Peggy Guggenheim Collection is based.

The Gritti Palace is one of the most famous hotels in the world. With its 91 guestrooms -- 80 doubles, 2 singles and 9 suites -- it offers superb lodging and provides special courtesies in an elegant, refined setting.

Upon request, medical assistance, interpreters and baby-sitting services can be provided, as well as a barbershop and beauty salon.

Partnership with the two most prestigious museums in Venice, the Peggy Guggenheim Collection and Ca’ Rezzonico, offers the opportunity to visit both collections privately.